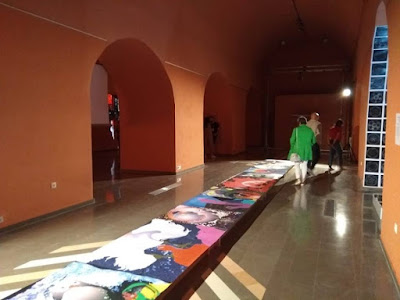 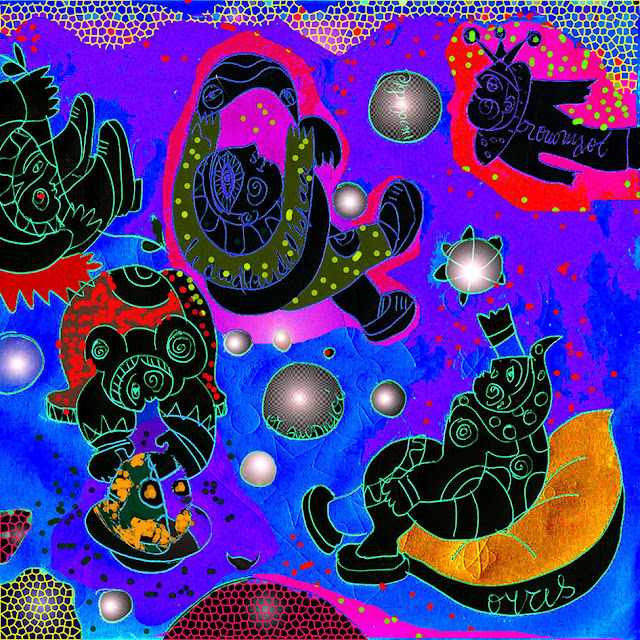 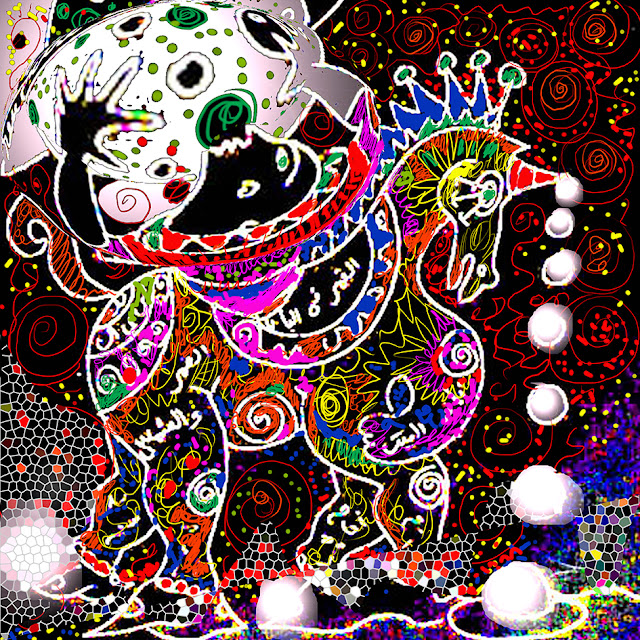 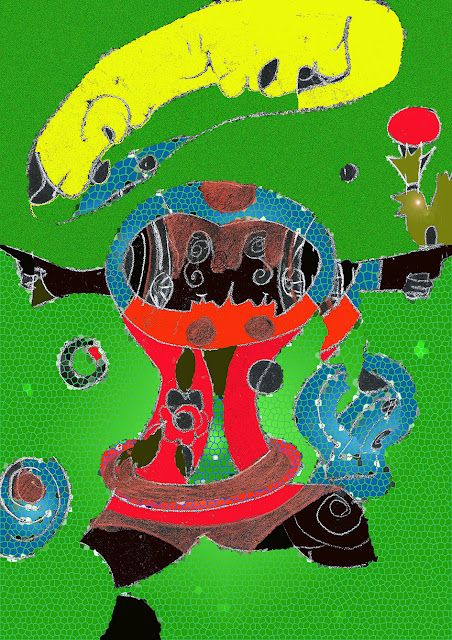 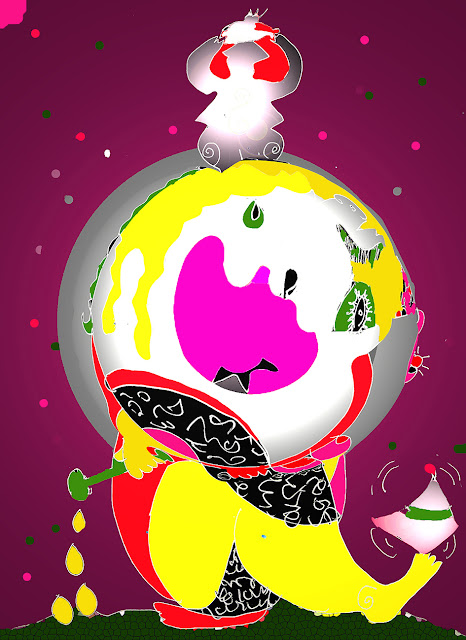 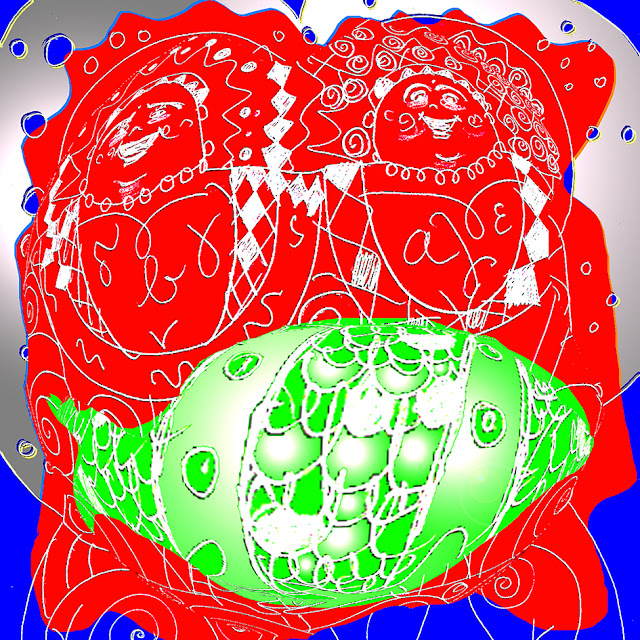 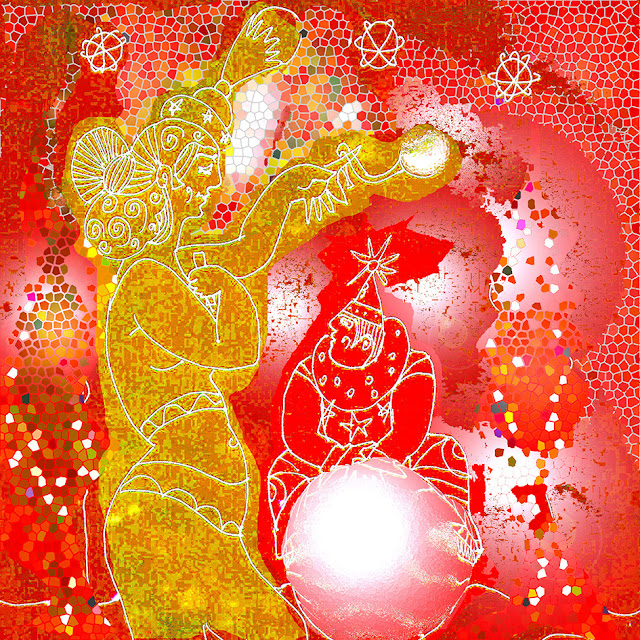 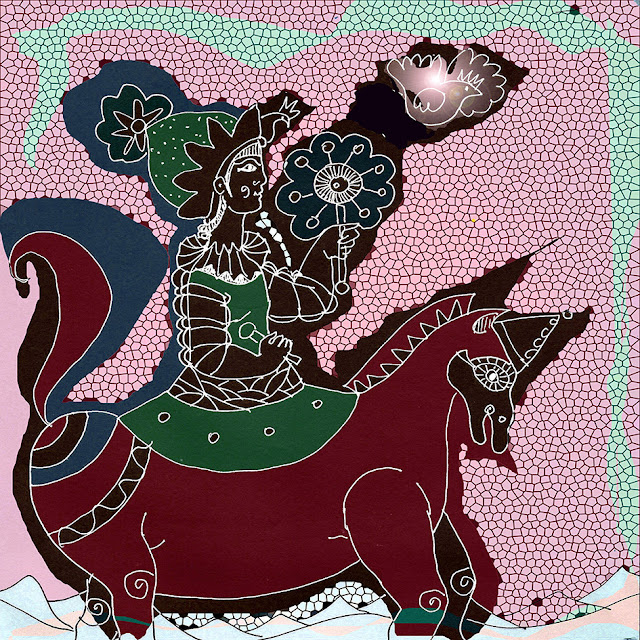 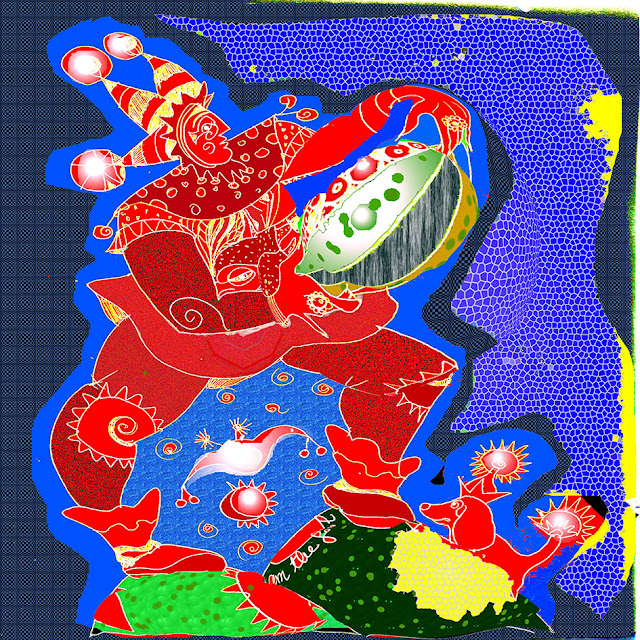 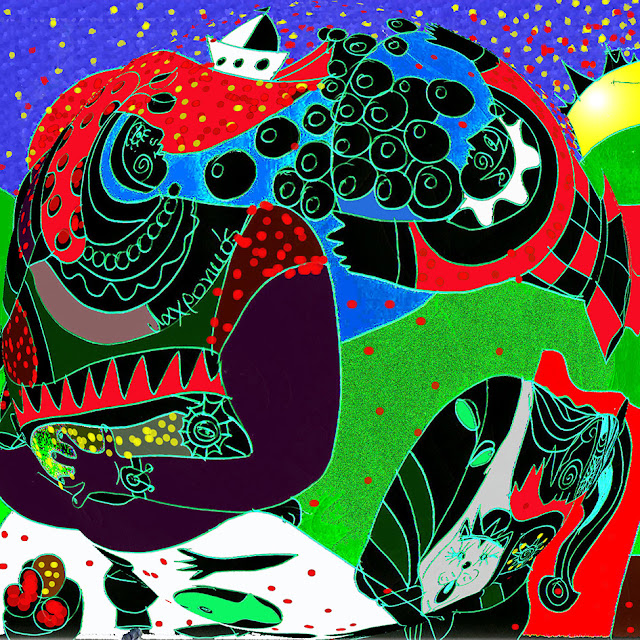 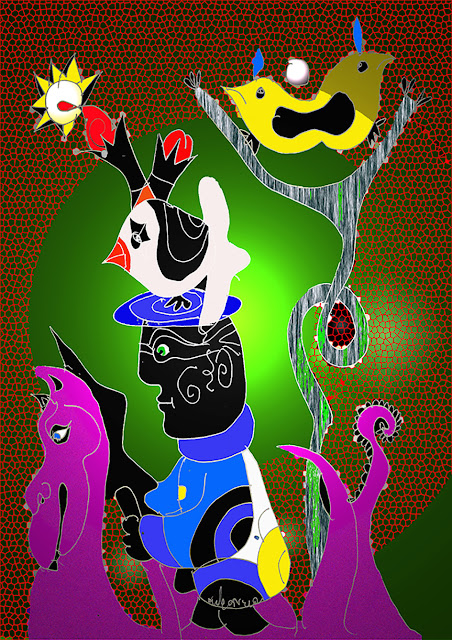 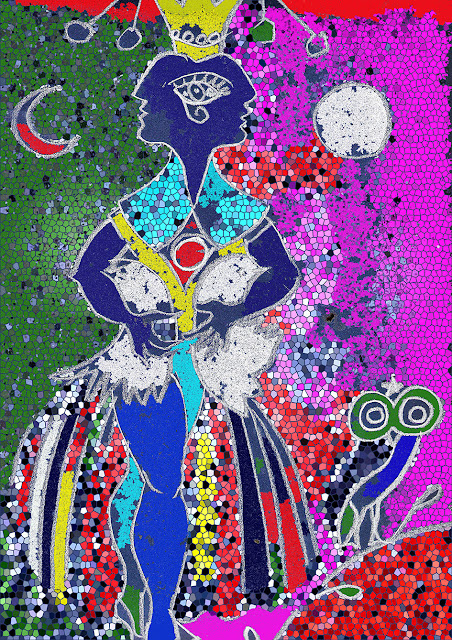 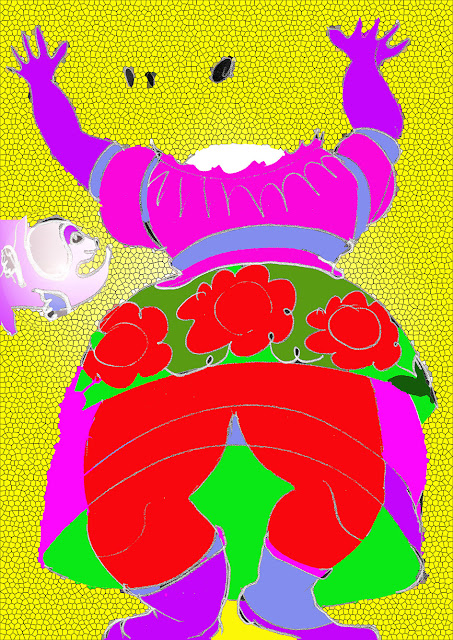 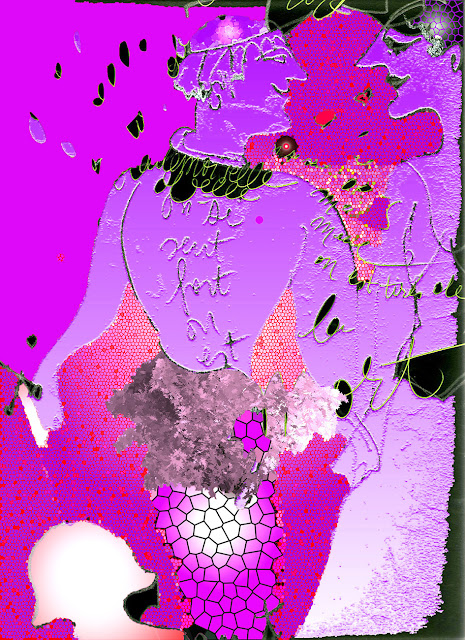 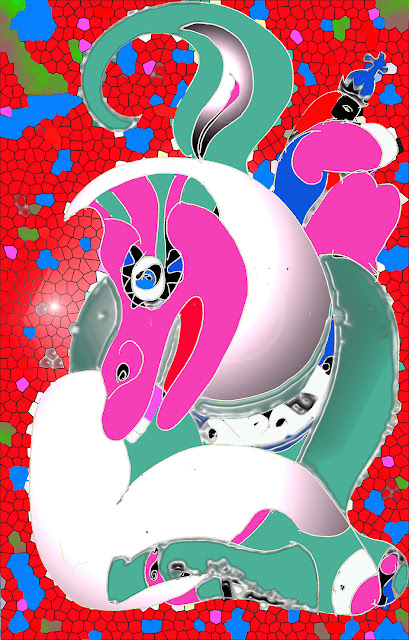 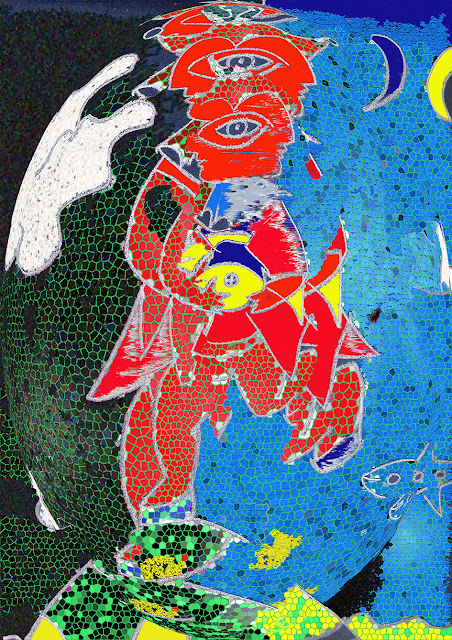 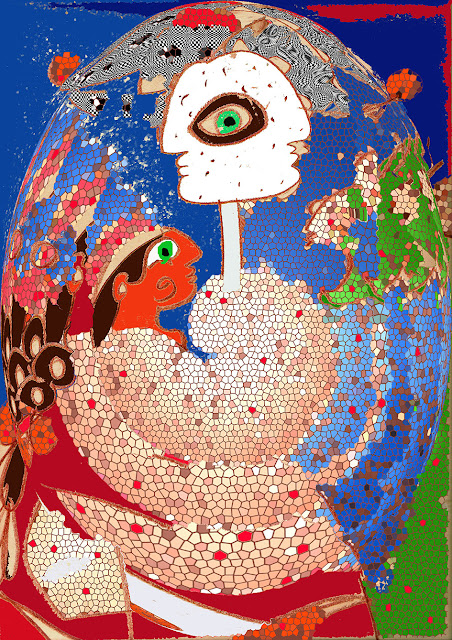 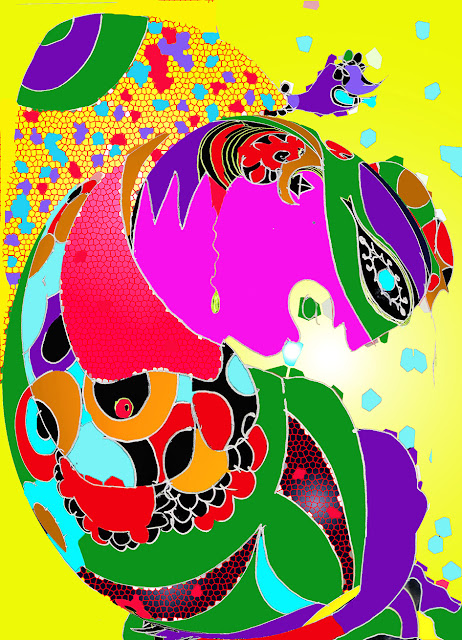 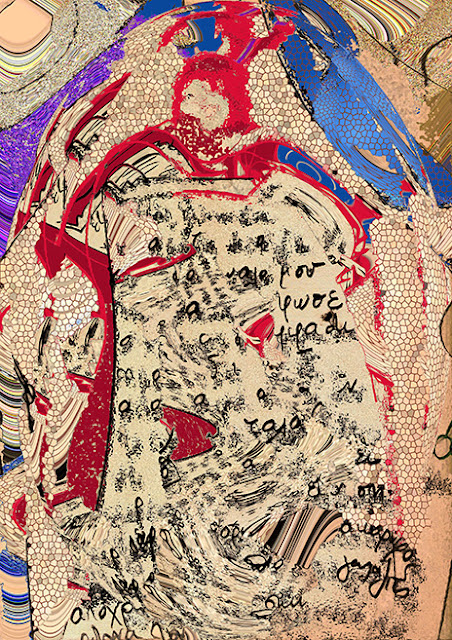 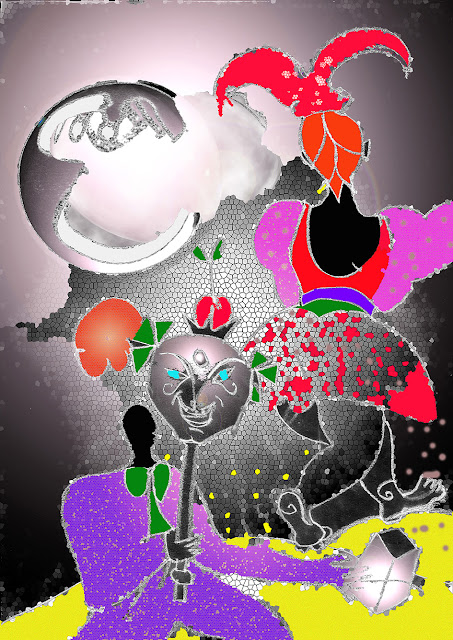 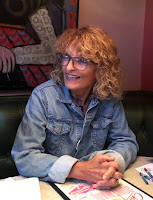 PolyXene Kasda, Egypt-born, ‘neither-artist-nor-writer’ Greek homo sentient, studied Fine Arts at the Soeur Hermann Besancon workshop in Alexandria, Physics - Chemistry in A.U.C Cairo and Psychology - Sociology in ACG Athens. In her long artistic and writing career she has been haunted by Something Essential Missing (Kasda, SEM 90), the transcendence (Xene) / immanence (Poly) interface, liminality, spectrality, myth, the intangible and perception in art, consistently occupied with the improvisation of new materials (PXK ) and metissian processes of space generation, experimenting with forms of Agro-Social Action Generative Art  (Kasda, Uranias Gardens 09-17)  and visionary pragmatism (Visionary Art  Life Achievement Award 17). She is an international multi-awarded artist. Her latest artwork was Twixt Cup and Lip, Surfing on the WB legendary spaces, a 200X1000 cm painting+digital print installation for the Biennale of the West Balkans 2018 Greece.Her book “The Conscious Eye: Art-Perception-Informatics” (1986) marks the beginning of the art theory and artificial intelligence discourse in Greece (Zikou, 2017).


A documentation of 30 years of cross-disciplinary research with dialog between Poly Kasda and John Kontos.
In this years conference “Taboo, Transgression, Transcendence in Art & Science” (26-28 May 2017, Ionian University, Corfu Greece) I presented an essay in an html format on the intersection of art theory and artificial intelligence in Greece through a case study and a critical approach.
You can browse the html presentation here: http://lekseikones.metartnet.com

Snippet from the film documentary ‘The adventures of the eye’ (Οι περιπέτειες του ματιού) by Poly Kasda, directed by Marc Gastine, TV show Periskopio, Athens, Hellenic Radio Television, 1986
The paper -soon to be included in the conference proceedings- is a follow up of my theoretical research in the cross-disciplinary field of art theory and artificial intelligence.
You can read the abstract below and the full paper in Academia:
Title
Art Theory and Artificial Intelligence in Greece: A documentation of 30 years of cross-disciplinary research with dialog between Poly Kasda and John Kontos
AbstractThe essay aims to bring forward the ongoing collaboration of artist-writer Poly Kasda and professor of artificial intelligence John Kontos, who marked the beginning of the art theory, consciousness and artificial intelligence discourse in Greece in the mid 80’s, based on an original research.
To this end, the essay outlines three projects of Kasda‒Kontos collaboration in the course of 30 years, which explored the intersection of their threefold field of endeavor:
In respect to Kasda–Kontos’ research in process, I will attempt a critical reflection between art theory, consciousness studies and artificial intelligence, stressing in particular the concepts of myth and mythical thought, which Kasda has explored persistently with original contributions through her long-term project Myth/Network (1990-2017).
Keywords
art theory, artificial intelligence, consciousness, Poly Kasda, John Kontos, introspection, myth 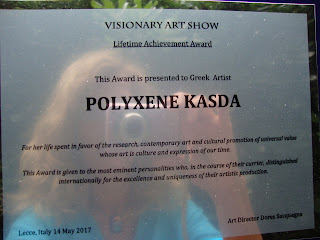 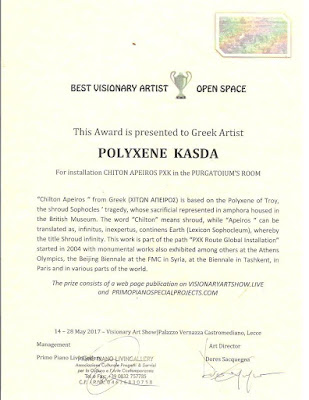 I was born in Alexandria Lost ; a shifting Hellenistic homeland grafted with the element of deconstruction, reconstructed in the dissipative global structure of my  Project Myth/Network .  I was born in the ‘point zero of the present as defined by radiocarbon calibration, in the beginning of nuclear tests and the changes in the measurement of time with the first computers.
I choose to start this intervention with one insightful moment that shifted my point of view and has defined all my subsequent work

“I was walking knee-high in the sea of Avithos in the burning aroma of the sun reflected by the sparkling membrane of the water. I was warm light. Someone called me. At the sound of my name my familiar world emerged with me from the light. It was a slow-burn experience of me seeing myself seeing the reflection of an otherwise inaccessible reality. This innocent summer walk 1985 turned out to be the most revolutionary act in my life”
This peripatetic time-shift insight into my very process of perception, had inspired me to write The Conscious Eye, Athens 1988, a short essay dealing with an eye seeing itself seeing, thinking itself thinking, while undergoing the cubist-state-of-mind that sealed the arts and sciences of the 20thc., revealed the linguistic-cognitive scaffold of vision (references to structuralist and conceptual art) and triggered modern crisis, mining with autognostic explosives our certainties.
In that reflexive essay I had made many references to the then rising science of A.I. as an endoscopic tool (research conducted at Prof. Papert’s lab.  MIT , A.I. department 1985).
The Conscious Eye 1988 was revived by A.I. Professor who injected the old text, with contemporary research in Artificial Intelligence and Machine Consciousness in the joint essay Artificial Intelligence Professor John Kontos ‘Needles’ Poly Kasda's Conscious Eye,
Intelligence is what hasn’t been programmed yet and so is the unsolvable mystery of our consciousness. In this light, Artificial Intelligence-Machine Consciousness Technology is an introspective tool explicitly disengaging us from our absorption in our ‘being-in-the-world’, unleashing, by the power of contrast, the possibility of an endoscopic participation in the phenomenon of Being- in- the- world.
“ But, what was the nature of this compulsive tide that pushed artists in a self-cancellation frenzy, leaving behind a dilapidated mental space and the labyrinthine traces of an unsatiated question mark?”
With this question my book The Conscious Eye 1988 was completed and I was left with this viral Something Essential Missing.
Now I know that this ellipsis, this devouring self-grinding wormhole hollowing itself out in the comfort of convention is the most precious element in our human consciousness. I knew I had tο drift into it to be able to comprehend incomprehensibly this matter which was other than anything known.
In 1990, I surrendered to my SEM attraction and I found myself in the bottom of the Lake of Mornos, in Greece, which, was hit by drought, uncovering, for a short while, a Hellenistic city and a submerged sanctuary 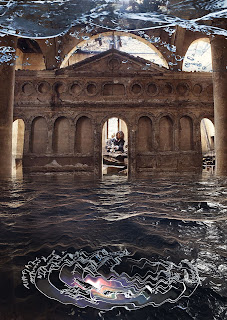 Metaphorically, I was sucked into my counter-clockwise reflection, my whole being swallowed inward in myself, in the self-engulfing archetypal fields of Puer Aeternus, carving with my searching fingers the mud overflowing the sacred altar as though I was trying to exhume that SEM from its own sacrificial plinth.
The mud sculptures, relics of that ritual performance, the Chrysalii, were soon seeded by hundreds of international participant-interactors, in 300 sites, in 27 countries, co-creating a biodegradable, interactive global installation which melted in the rain leaving behind a conceptual web of relational arrows, without the use of web technologies which were still unknown.
Attuned to my “transcendent-I” still held in ‘the other side of the mirror’, I was now unleashing on the crest of the nineties the repressed imagery of my swelling consciousness which I was rediscovering embodied in the mythical topology of Greece. My art-works now consisted mainly of affective immersive maps, charged with graphisms and time-shattering instructions merging spectral/ actual space, tracing mythologically-augmented- anti-historical parcours, activating dormant receptor, restituting with chunks of information mythically augmented spectral hyper-spaces without the use of Virtual Reality technologies, through the consensual synesthetic engagement of the participating poets.
This early crust of breakthrough experimentations was recycled in 2009 into the fertile layer of Urania’s Gardens community projects, realized with the collaboration of PrimopianoLivinGallery, social art generating artwork merging actual / inner/spectral space:
There I was  pattern-Setting and monitoring  a set of techno-agro-psycho-social applications, in culturally gagged, mythically augmented loci of Greece, based on a core idea and evolving script layers outpacing the emerging psychosocial play states-
Special attention was given to the phasmatic affect of ancient relics on our cognitive processes
Urania’s Gardens projects ranged from art-constellations in remote villages, exploration of madness in social semantics, linguistic games and treasure-hunt games on legend-freighted subjective maps with the risky guidance of Heraclitus’antinomic fragments, exploring the ecstatic power of paradox, meant to elicit the impossible experience of PAI, the archetype of the Child playing 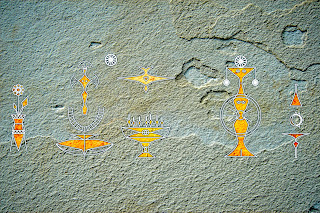 Our current project under preparation is Kadmus looks for Europe, an Alphabet-centered project in which the whole city of Thebes is to be converted into a linguistic playspace crammed with Lexomorphic patterns generated by the numerical modeling of words based on the Ancient Greek numerical codification of the Greek alphabet: a fascinating linguistic game where everyday words are morphing into elegant rhythmic number-sets meant to renormalize our disrupted rhythm with their ancient examined proportions. 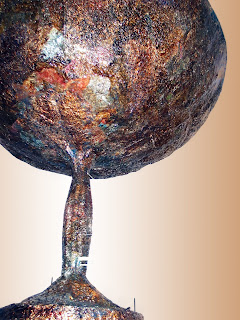 The Lexomorphe generated by the numerical modeling of the Greek word CHRYSALIS is the legendary Graal, that became a ‘speaking sculpture’ a public space monument installed in public space. It is made with my innovative material PXK that represents my skin left behind. The Chrysalis monument hosted the Olympic flame in 2004.

Is our impossible object of desire incarnated in language itself?

Etymologically the Greek word Onoma means ‘giving self-birth to Being’ (Kratylus). Could language be the Virus-of-Man that drives him to commit heroic self-sacrificial acts to leap out of his mortality as Anthropos?

Currently, I am involved in completing Chiton Apeiros, a floorwork inspired by Polyxene’s sacrificial cloak in Sophocles tragedy. A depotentiation shroud made with patches of my Olympic Chrysalis monument. It is the final part of my PXK Route global installation 2004-2017. Here are 30 pieces of this material PXK shreds of this global installation. 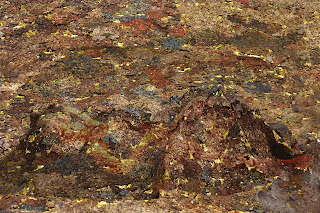 Could the Gene of God, this partially hereditary predisposition for mystic experiences, favored by natural selection, as postulated by Dean Hamer, be a genetic reformulation of Yοung’s archetype of the Child (PAI), that ‘psychic organ’ that allows us to mystically participate in the emanation of Being in the world?

Myth/Network is a noetic artwork, evolving on the interface of liturgical inertia/empirical time, anchoring current geopolitical con-fusion to the dispersive configuration of our mythical infra-structure.

Project Myth/Network is an intercalage of presents springing from the same principle performed on the game- changing threshold of the 21st century. Could its 4D noetic structure be echoing the dispersive configuration of the “Aeon that is PAI (Child) at play” ? (Heraclites)
It could be so and it could be otherwise” (Socrates).